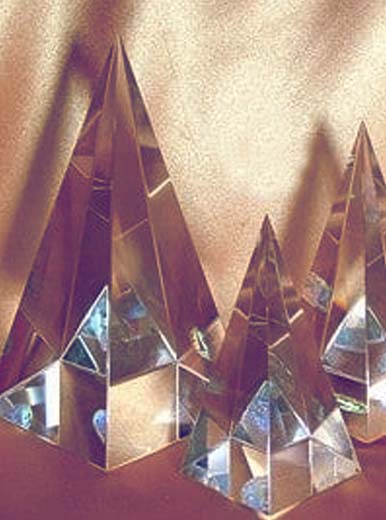 This research was carried out by the Russian National Academy of Sciences which includes: the Russian Academy of Medical Sciences, Institute of Theoretical and Experimental Biophysics, Graphite Scientific Research Institute, and the Institute of Physics in Ukraine.

Pyramids have been important structures for healing, spiritual communion and meditation in many different cultures. The powerful high aspect ratio pyramids can be found in the Nubian area of Egypt, the Mayan temples and in the roof design of Hindu and Buddhist temples. These cultures learned that the frequency of these structures promotes a positive result.

All components of our healing rods, from outer metal casing to inner ingredients have been conditioned inside a 72-foot tall russian pyramid. We are the only manufacturer of healing rods that follows this important protocol.

THE ENERGETIC BLESSING IS TANGIBLE!

“I was highly skeptical regarding the effect of the pyramid on the physical and chemical properties of non-organic materials. We therefore decided to resolve the question with a many-sided approach. We used the whole arsenal of methods available in our laboratory to evaluate the effect, or lack of it, of the pyramid on the physical properties of carbon (graphite) materials. We chose for the purpose a specific material known as quasi-two-dimensional graphite. To put it simple, this is high-temperature pyrolitic carbon, highly textured and precipitated on a hot liner at 2000Â°C.

Its highly pronounced two-dimensional structure leads to it having a mundane and generally understood property – electrical conductivity – that is not affected by such powerful energetic influences as neutron radiation. Neutron radiation as high as 1019 neutrons/cm2 produces no significant change in the electrical conductivity of a material like quasi-two-dimensional graphite.

It seemed to us that if neutron radiation has no substantial effect on electrical conductivity, then the mysterious pyramid was hardly likely to influence it. As a consequence, we were terribly surprised, but it is a fact – experiments on electrical conductivity carried out in our laboratory by Sergei Kuvshinnikov demonstrated that conductivity does change, by a factor of several times. More than that, the influence of the pyramid depends on the time of day when the samples were placed in the pyramid and when they were taken out. The changes in electrical properties, conductivity in particular, followed a periodic law, and the amplitude of these oscillations depended on the length of the pyramid’s influence and the time when the samples were removed from the pyramid…”

V.I. Kostikov.
Academician of the Academy of Natural Sciences of the Russian Federation
Director of the Graphite Scientific Research Institute

“It may even be not a bad thing that our science finds itself in such a difficult position, because the people left in it are obliged, under conditions of poor material encouragement and poor supply, to think very well. And in the problem we are examining today our task is to bring in the best people so that tomorrow’s technology will be founded on new principles and new capital-intensive investments. I should like to stress the idea that hitherto in all forms of technology we have had four variable parameters: temperature, pressure, time and concentration. Now, perhaps I am being hasty, possibly I am leaping to conclusions that are too bold, but to those variable parameters in technology we can add a fifth – the PYRAMID, with all consequences deriving from that. This is despite the fact that the method by which it operates is still the subject of debate and theoreticians will be working for a long time yet on how to put it to practical use. Still, the existence of this fifth parame ter gives us the opportunity to obtain new results in practically all forms of chemical, metallurgical and other technologies.

Now it is possible to state boldly that this is the technology of the twenty-first century. And the further we advance, the more we will feel the influence of information on the technological process, and most importantly we will use it, since we sense all these things from the depths of antiquity. There are very many facts indicating that these factors have influenced events, people, decisions taken, and so on. But, probably, for the first time with the use of the pyramid we have acquired the capacity to influence the final result in a given direction. That is the most fundamental difference. Previously we knew it , sensed it purely empirically, but today we have the opportunity, by introducing this factor, to vary the end result. This is, I believe, the coming technical revolution, one that will be unparalleled in human history ”

That is to say that there is real, concrete data that cannot be denied. Doubt is legitimate. Here in our laboratory, incidentally, we demonstrated our results to some of the country’s foremost material scientists, specialists in the fields of aviation materials, powder metallurgy, semiconductors and electronics. They were the directors of leading institutes who visited Egypt together with me. We showed them these results. Despite the fact that they are all, if you’ll excuse the expression, hard-bitten materialists, they left here inspired, with the understanding that here we have come into contact with the great invisible, but not on the level of psychics, soothsayers and magicians, but on the level of measurable quantities and variable effects.

Pyramids Field(1)Based upon research carried out by the Russian National Academy of Sciences which includes: the Russian Academy of Medical Sciences, Institute of Theoretical and Experimental Biophysics, Graphite Scientific Research Institute, and the Institute of Physics in Ukraine, the following has been shown that an area with a concentration of pyramids will demonstrate diminished seismic activity. More precisely, instead of one powerful earthquake there are hundreds of tiny ones. Also, in the atmosphere above the pyramids the state of the ozone layer improves.

Based upon research carried out by the Russian National Academy of Sciences which includes: the Russian Academy of Medical Sciences, Institute of Theoretical and Experimental Biophysics, Graphite Scientific Research Institute, and the Institute of Physics in Ukraine, the following has been shown that an area with a concentration of pyramids will demonstrate diminished seismic activity. More precisely, instead of one powerful earthquake there are hundreds of tiny ones. Also, in the atmosphere above the pyramids the state of the ozone layer improves.

Additional findings indicate that burial of radioactive waste in pyramids loses its toxic properties. Agricultural seed treated in pyramids results in a yield increase. Diamonds synthesized from graphite stored one week in a pyramid are more pure, hard and more perfectly shaped than usual. Water stored in pyramids retains its properties for years.

It is beleived that a week after a complex of pyramids was installed at the Ishimbai oil field of Bashkiria in southern Russia, the state of the strata changed. The oil became lighter or less viscous and a number of its physical and chemical properties were altered. Also, the yield of the oil wells increased.